Last week, our two-day international hybrid conference of the GTL project took place in the south of Spain. The first day was hosted by our partners IFEF and the Cádiz City Council. Besides all project partners from Spain, Greece and Slovakia, other institutions of the entrepreneurship infrastructure from Cádiz were present (among others Incubazul and CEEI). In addition, some of the GTL-funded startups were connected online. In a fruitful conversation, the project activities – with a special focus on the support measures for young entrepreneurs in the region of La Janda – were presented. Some of the startups from La Janda presented their successful implementation of their business idea and were talked about their challenges but also the newly developing chances and visions for the future. The afternoon of the first day was dedicated to an internal international partner meeting to discuss the final activities of the GTL project. In particular, the project team used the first face-to-face meeting of all partners to explore further spinoff activities to ensure the sustainability of the project structures but also of the well-established cooperation. The second day took place at the University of Seville and was hosted by AICIA. The day was characterized by the exchange of experiences of the international GTL startups and the potentials of the green economy. For this purpose, besides keynote speakers from USE and Technological Corporation of Andalucia, numerous GTL startups from Spain were on site, Greek and Slovak initiatives were live connected. After the presentation of the projects, interactive World Cafés took place on the topics of external financing, digital tools for marketing the business idea, new business ideas in the field of energy efficiency and main challenges of growth. Here, the participants had the opportunity to intensively share ideas and also to spin new networks. In a joint wrap-up, the results were summarized and the future support offers – also beyond the end of the project – were presented. We would like to thank all attendees for their active participation, especially for the exciting discussion between the GTL Startups and the organization of our Spanish partners. It was an inspiring event and we were very happy about the personal dialogue. 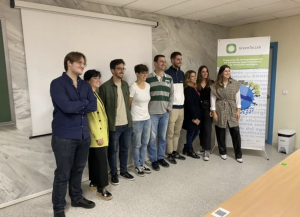